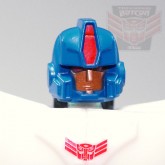 When Thunderclash was initially revealed on Botcon.com, he had a slightly altered and shortened version of his bio accompanying him:

A decisive leader who is never afraid to take action, he commands the instant respect and loyalty of every soldier he takes under his wings. With a razor sharp mind, and a reputation for rescuing troops under his command from disastrous situations, Thunderclash is considered an ideal mentor to initiate new recruits into the Autobot ranks.