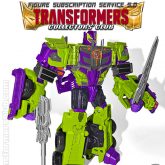 The preorder listing page for the TCC Subscription Service 5.0 presented a slightly different bio for Toxitron:

Forgotten. Abandoned. Left to rot in purgatory. This will not be the legacy of Toxitron. A brute found by Shockwave on the edge of the Sea of Rust foraging for scraps of Energon, Toxitron was promised a better life, modifications, enhancements and surely a reputation that would last for eons. In a single word: Perfection.

However, perfection failed to live up to its promises and “failure” became the word attributed to Toxitron's intended upgrades. Left without any of the ‘gifts’ Shockwave had predicted, Toxitron was a living weapon. A being who constantly discharged lethal toxins and poisoned anyone around him. When not on missions, Toxitron had to be kept in a state of cognizant stasis to protect his fellow comrades.

Eventually other bots came to process special abilities from Shockwave’s modifications. More and more time passed between missions until finally Toxitron was forgotten about altogether. Becoming more and more angered by his abandonment, he vowed to take revenge on those Shockwave found to be more ‘perfect’.