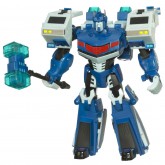 During Starscream's brief captivity between Mission Accomplished and A Fistful of Energon, Ultra Magnus took advantage of Starscream's capture to download a sample of the unique Decepticon flight protocol. Unfortunately, this gave Starscream a chance to escape, a blow to Ultra Magnus' aim to stabilize the situation on Cybertron by showing the Elite Guard had Megatron's former second in command in custody.

However, with the Decepticon flight protocol, Ultra Magnus was able to have the Ministry of Science's Perceptor put a team of scientists (including Wheeljack and Red Alert) to work on developing an Autobot capable of flight. Project Safeguard, as it was dubbed, was a great success, producing a pair of flight-capable Autobots.
(There was a sinister undertone, though. Unwilling to waste Elite Guard resources, Ultra Magnus instructed Perceptor to search for someone expendable from the Energon refineries, and Perceptor eventually came up with Jetfire and Jetstorm, who had been wrecked in an accident. There is no suggestion that they willingly volunteered, though the alternative was to go offline anyway).

However, the power of these new Autobots was so great that they sailed through Elite Guard training and became cocky. This concerned Ultra Magnus, who wanted to put them into a real combat situation. Perceptor came up with the idea of using a simulation of Starscream, based off of the code taken from the real thing. However, the simulation went out of control and put both Jetfire and Jetstorm at risk. Perceptor fortunately regained control after a while, and the realistic combat did little for their egos. Ultra Magnus was suitably impressed, though, and assigned both of the Autobots to go with Jazz and Sentinel Prime in a mission to track down escaped Autobot traitor, Waspinator.