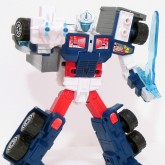 In addition to the bio including with the toy (quoted above) E-Hobby posted a bio on their website for Laser Ultra Magnus, in the style of the More than Meets the Eye bios:

Profile: A natural soldier, Ultra Magnus feels he is better as a follower than a leader. When entrusted with missions by his great commander, he displays his magnificent fighting skills, courage, and gift for battlefied improvisation. Though he finds the role of leadership oppressive, when it is clear he has no choice, once he has prepared himself, he makes a magnificent commander to guide his companions, resolute and courageous beyond reproach. He is ever-ready to sacrifice himself for those he must protect, and indeed, once when he was savagely assaulted by the Decepticons, that resolution finally became a reality. After his heroic death in battle, as he had briefly been the bearer of the Matrix, his soul was accepted among those guardians of wisdom beyond that of the present world, but he never felt that he truly belonged in that peaceful realm. Shortly afterward, with the cosmic awareness that came with being part of the Matrix, he learned that Galvatron II was putting the galaxy in crisis by commanding a fearsome mobile battle fortress. Magnus made contact with Commander Optimus Prime's consciousness, and using the power of Prime's "Reconfiguration Matrix," achieved his own resurrection. Once revived, Ultra Magnus immediately assembled a strike force and made firm preparations to bring down Galvatron II. Now there is no room for doubt on the path he must take.

Abilities: Thanks to the structural conversion abilities of the Reconfiguration Matrix, Ultra Magnus is now able to transform into various modes, including his original body, but this "laser rig" mode, created based on the structural formula for Laser Optimus Prime, is particularly outstanding for its comprehensive offensive capabilities. His body consists of two independent modules. The truck cab becomes a robot which is imbued with sentience--this is the part normally recognized as Ultra Magnus. In this mode, his normal form by itself now exhibits power rivaling his original large robot mode, and his quicker mobility gives him full command over a wide variety of hand-to-hand combat techniques. He also has four launchers, which carry a total of 16 rounds, built into his shoulders, from which he can fire short-range missiles with an effective range of 100 km. The tanker trailer section transforms into his battle station module, making a variety of weaponry available to him, including a ripple-fire missile blaster, armor-piercing discs, and a laser-targeting rocket launcher. He primarily remote-controls this equipment via a mind link, but it can also use defense programming to attack automatically, or his fellow Autobots can deploy themselves about it and operate it manually. In vehicle mode, he is armed with a rotatable armor-piercing disc launcher, and he can project powerful energy rams from his headlights that can pulverize their way through obstacles on the road or protective barriers on enemy strongholds. He can also feed energy from his laser core, the nucleus of his life force, into the light saber weapon and laser cannon that are his personal weapons, phenomenally increasing their destructive power.

Weaknesses: Ultra Magnus must take even greater care than normal in order to master the multiple functions of his new combat configuration. Sometimes he makes errors in function selection, causing instances of disruption in weapon control. Aside from this point, he has no known weaknesses.