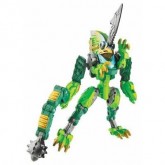 Jungle Planet Key #s48a
Unlocked information from http://www.transformers.com:
Undermine is just like what his name means! He is sneaky, dirty and foul! He would sell his own Grand-Transformer-Spark to make a dollar! In fact, when Scourge had just taken over as leader of Jungle Planet, Undermine did something that truly earned him his name! Scourge had a bodyguard-bot named Shrapnel, Shrapnel was a reliable bot and never once said anything bad about any other Transformer. Well, Undermine took a mini-recording device and faked a message of Shrapnel telling Scourge he was a smoke-ring blowing sissy! Well, when Scourge heard that he was furious!!! Soon enough, Shrapnel was sent packing, and Undermine was placed as Scourge's new bodyguard. What a rotten guy!